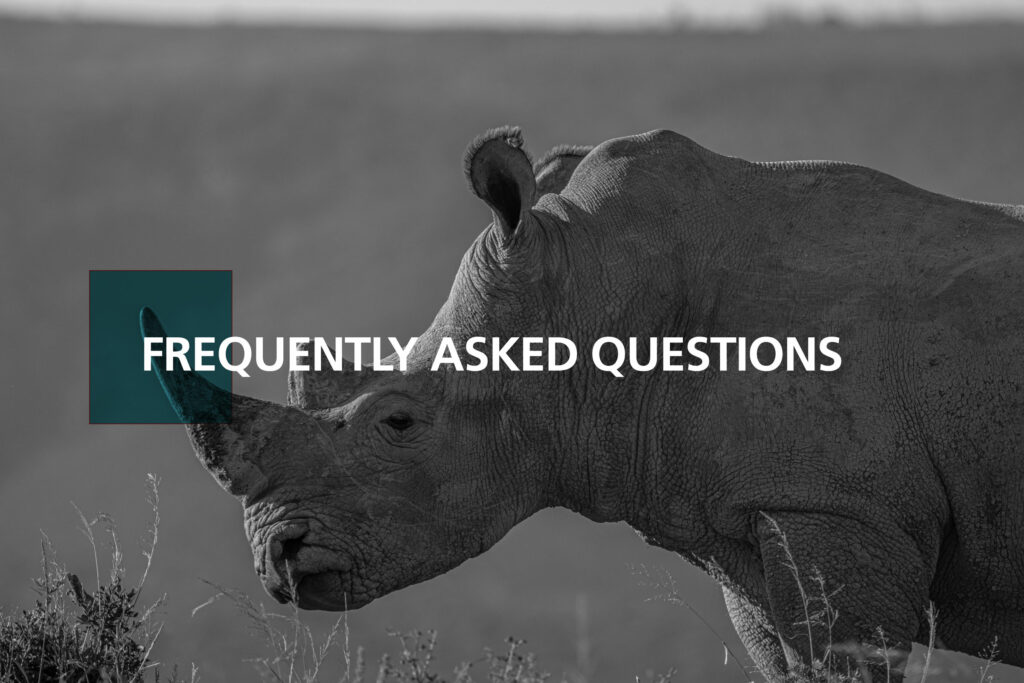 Q: Will it harm the animal?

A: No, it will not harm the animal, because carefully measured quantities of radioactive material will be inserted into the horn of the animal. The appropriate quantities will have been determined before any treatments are carried out by careful computer modelling, and then laboratory-based measurements done on phantoms. Phantoms are full scale models of the rhinos’ head which are carefully made to simulate exposure conditions, so we know what will happen when a rhino does have the radioactive material put into its horn.

Q: How will the poacher know not to poach those rhino

A: There will be a number of different ways in which the poacher will learn not to come onto a property to poach these animals. There will be strategic signage posted at regular intervals on the perimeter fencing, there will be an extensive local education effort to inform residents in the area that these animals have been treated, and more generally a social media campaign.

Q: How will the reserves know which rhinos are treated with the isotopes, be informed?

A: The marking of those animals that have been treated on a reserve will be in a manner agreed by the rhino owner or the reserve management team. The research team will be looking into the pros/cons of an obvious mark placed on the animal, post treatment

Q: By boards on the game fence? A branding on the horn?

A: There may very well come a time when it would be appropriate to do something like a brand on the horn, at present the behaviour of the poachers would suggest it wouldn’t work. They are already killing dehorned animals out of frustration.

Signage is a necessary tool  for the overall anti-poaching aim of the programme. However, the exact nature of the signage needs to be worked out, so that people who are unfamiliar with international signage conventions, and who may not be literate can recognise a symbol or set of symbols which they will readily recognise, and realise that the animals within the fences aren’t worth poaching

Q: Could the isotope, if correctly extracted be used in any other aspect? How long is it radiation longevity?

A:Theoretically it would be possible to extract the radioisotopes, if the people doing the extraction had a fully equipped radiological laboratory with many thousands of dollars’ worth of equipment available to them. The quantity of material then extracted would not in fact pose a significant security threat. However, the mere possession of illicit radioactive material does then expose that person to additional legal consequences. The time that a radioisotope remains detectable is a function of its half-life. The half-life is a specific property of radioisotopes, some radioisotopes have a half-life that is a fraction of a second, others days, months, years, some for many millennia.  By the judicious selection of a radioisotope, we can then decide the length of time between repeat treatments.

Q: Can the radioactive scanner pick this signal in transporting crates through international borders

A: This is one of the key reasons for using radioisotopes. There are thousands of radiation detectors installed at many strategic points across the globe. At places like harbours, airports, land crossings and elsewhere. Border and customs agents are also routinely equipped with handheld monitors, along with many first responders. Global distribution of these detectors enhances the ability of law enforcement agents to detect the movement of radioactive rhino horns.

Q: Will the radiation make an animal and calf deformed?

A: No. Research on animals from areas around Chernobyl and Fukushima, show that this will not be the case. The levels being considered for use in this project are only slightly higher than the upper end of what people are exposed to by background radiation.

Q: Surely the radiation will kill the animals?

A: No. There is a lot of research work being carried out to make sure that this does not happen. If research were to show animals were going to be harmed or killed by the radiation, then the project would cease immediately. If the animals don’t manage to live and breed the project fails in its aim to protect the animals.

Q: What if you drop the radioactive seed in the grass and cannot be found? And other animals accidentally ingest it?

A: This is a highly unlikely scenario as specific standard operating procedures will be developed to ensure that no radioactive material will be left behind at the treatment site. Should an animal ingest some of the radioactive material subsequent to the initial treatment, the radioisotope will be of such a chemical and physical form that it will quickly pass through the bowels of the animal and be excreted out by that animal. The calculated doses will not do any significant harm.

Q: Will veterinary surgeons who have to treat an animal some months after a treatment be in danger from the radiation?

A: Once again, the answer is no. Provided the veterinary surgeon or a member of his staff does not spend a prolonged period of time (a number of hours) tightly holding the horn they will be quite safe to handle the rhino.

Q: Will the end user be harmed by ingesting some of the radiation?

A: The potential user would have to consume a whole rhino horn to cause themselves harm. The intention is not actually to harm the end user but to use their natural fear of radioactive materials to dissuade them from wishing to purchase or otherwise acquire radioactive horn. They might get sick if they consume enough of the horn.

Q: Is it safe for humans to handle?

Q: Does it affect the environment around the animals, is it harmful to other animals?

A: No it will not affect the environment or other animals around a treated animal